February 14, 2017
Make your entrance one for the books with one of these expert-approved songs! 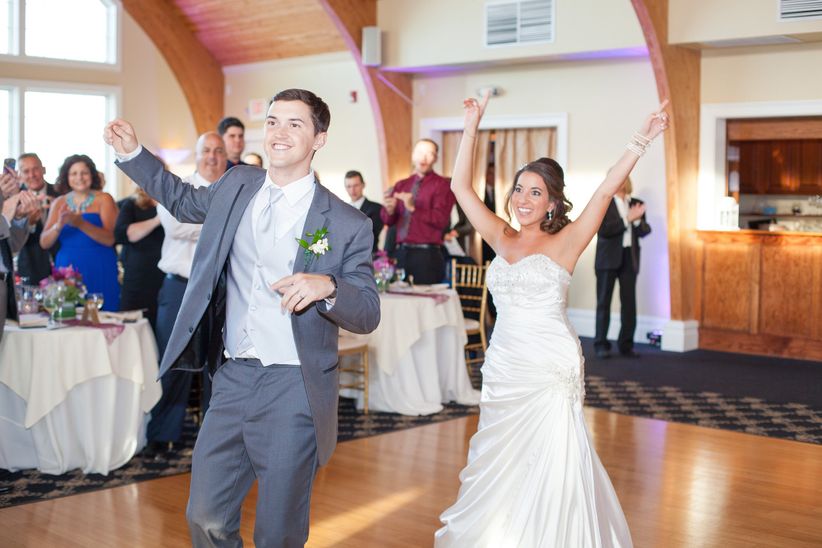 It’s one of your first big moments as a married couple—your “grand entrance” into your reception! The song you pick for this important moment is crucial—it will set the tone for your entire reception. We asked DJs from around the country to share their suggestions for grand entrance songs. Their advice? Pick something personal! “Choose a song that has an ‘anthem’ feel for your wedding, something that gives off the energy you are comfortable with while providing some creativity,” says Matt Brys of Extreme Productions Entertainment in Sacramento, California.

Check out some ideas from the DJs

The song: “Good to Be Alive (Hallelujah)” by Andy Grammer
Why it works: “This song’s positive message makes you happy just listening to it and what’s a happier time than a wedding?”

The song:“Dynamite” by Taio Cruz
Why it works: “The song starts out slow, so I can talk over the music. Right about the time I’ve introduced the couple, the song hits the chorus. It is a really fun and energetic song with a good beat that really sets the mood for the reception!”

The song: “Confident” by Demi Lovato (Instrumental Version)
Why it works:“It’s definitely a fire starter!”

The song: Favorite movie songs!
Why it works: “Movie songs give some insight into a couple’s personality and help connect family and friends more emotionally than a ‘normal’ pop song. Some of the more memorable ones are ‘Hooked On A Feeling’ by Blue Swede from Guardians Of The Galaxy, ‘Jump In The Line’ by Harry Belafonte from Beetlejuice or ‘The Imperial March’ from Star Wars. That last one always cracks the guests up, especially if the couple is really into Star Wars.”

The song: “S.O.B.” by Nathaniel Rateliff and The Night Sweats (Instrumental Version)
Why it works: “It’s a great song that’s not only got rhythm that the guests of honor (wedding party) can move to, but also has a very classic James Brown and the Famous Flames feel. It’s great for those with an alternative appeal for music.”

The song: “Bitter Sweet Symphony” by The Verve
Why it works: “This is a rare song in that it is both hip and classy and the instrumental version does not interfere with the wedding party introductions or clash with the couple’s first dance selection.”

The song: “You Make My Dreams” by Hall & Oates
Why it works: “Have your DJ invite everyone on the dance floor to join the grand entrance and dance with you. This is a great song to make that happen!”

The songs: “Shut Up and Dance” by Walk the Moon and “I Gotta Feeling” by Black Eyed Peas
Why it works: “These songs set the tempo for an upbeat evening. For couples looking for a more formal and classic reception, pick a song by Frank Sinatra, Dean Martin, or Michael Buble for a different feel.”

The song: “Time of our Lives” by Pitbull and Ne-Yo
Why it works: “The track is a ‘feel good’ party anthem that keeps the introductions moving! It’s high energy EDM/Dance sound helps to create a fresh and contemporary atmosphere all while reiterating ‘Give me the time of my life’ which is the whole point of a wedding reception.”

The song: “Uptown Funk” by Mark Ronson ft. Bruno Mars
Why it works: “ It has such a good beat and some great breaks in the song so the DJ can make the entrance announcements.”

The song: “No Doubt About It” by the cast of Empire (feat. Jussie Smollett and Pitbull)
Why it works: “The pure energy and the beat of the song. Plus, the two lines ‘If you came here to party/And ain’t no doubt about it’ make it a great high-energy way to start the night!”

3 Replies to “Reception Grand Entrance Song Ideas from the Experts”

Absolute Music is an elite group of professional DJs who exhibit energy, user-friendly attitudes, and perform with razor-sharp perfection. With over 27 years of experience you are in good hands!

Absolute Music is a company you can trust – a team of the highest quality professional Dubuque Wedding DJs at an affordable price. We take pride in each event we do, and are defined by the quality and attention we bring to our work. We are honored to provide entertainment and dedicate time and effort to your event.