By Kim Forrest
January 27, 2017
We asked DJs from around the country to share their favorite last dance wedding songs. 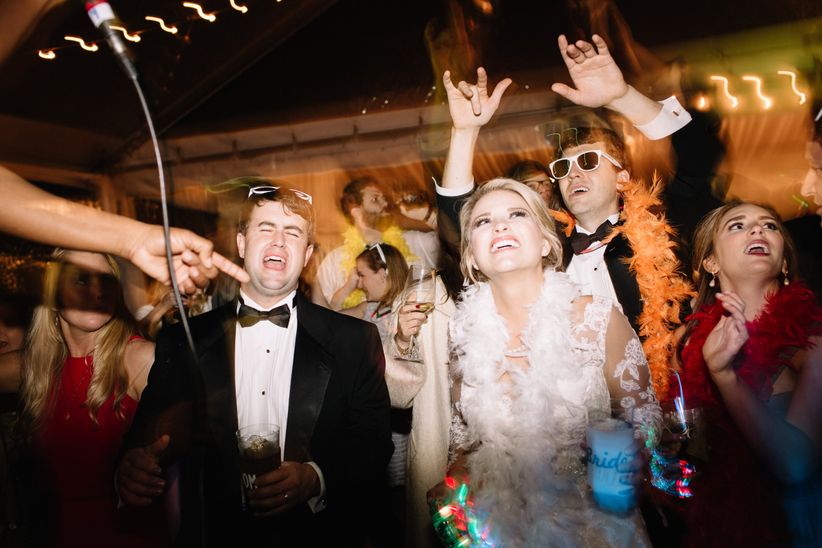 There’s often a lot of focus on choosing a first dance song, but it’s often the last dance wedding songs that your guests will remember the most. Your last dance wedding song will affect how your guests feel when they leave your reception. Do you want them to be energized and ready for the after-party? Or perhaps in a quieter, more romantic mood? The choice is yours (and your bandleader’s or DJ’s)!

“It’s that classic 80s song that is often requested and everyone sings along to!” says Matt Martindale of Amore’ DJ Entertainment, Lighting, Décor and Interactive Photo Booth in Colorado.

“The Time (Dirty Bit)” by The Black Eyed Peas

“This song samples lyrics from “I’ve Had the Time of My Life” from Dirty Dancing. Thematically, the song says everything you want to say in a last dance wedding song, but is still upbeat enough to get everyone moving,” says Jeffrey M. Hester of Music by Design in Geneva, Illinois.

“Ho Hey” by The Lumineers

“A step away from the heard-at-every-other-reception closing songs, with a melody and lyrics so sweet it’ll feel like honey coating your heart strings,” says Julie Leslie of Sounds Unlimited in Seattle, Washington.

“It starts out slow to give guests one last chance to get close, but one-third of the way into the song it gets going and it’s a great classic groove,” says Rich Siebert of Beach Boyz Entertainment in Cuyahoga Falls, Ohio.

“It has everything you look for in a last dance wedding song: a slow part, a fast part; it’s a timeless, mainstream classic that you can dance to, but more importantly, it’s a sing-a-long! There’s something about it that brings people together, and I can’t think of a better time to do that than at the end of the night,” says Bryan George of Bryan George Music Services in Washington, DC.

“It seems to be one of those songs every generation knows and likes to sing. I’ve never seen so many people hug, jump, and dance too!” says Ryan Girgis of DJ Tempoe in Long Beach, California.

“This is of one of the most popular Latin last dance wedding songs here in the Miami area. Translated, it means ‘There are not enough beds for so many people.’ In other words, it’s time for you to go!” says Jorge Hernandez of Vision DJs, Lighting & Photo Booths in Fort Lauderdale, Florida.
“We like to do two last dance wedding songs – a slow one so all the older folks feel comfortable dancing to one more meaningful song, followed by a really upbeat fun song. We encourage our clients to pick songs that they love for these two last dance songs.
However, upon request, we often will recommend songs such as ‘All of Me’ by John Legend or ‘Wonderful Tonight’ by Eric Clapton for the slow one and the fast one can really be any fun song from any genre or decade,” says Joel Giorgio of Greenbelt DJ Productions in Austin, Texas.

“I have seen this song used during this wedding season. It’s a great song that breaks away from the traditional last dance wedding songs,” says Cedrick W. Harris of Big Dreams Entertainment Inc. in Chesapeake, Virginia.

“Into the Mystic” by Van Morrison

“If you want to end on a moderately slow note, this is one of my all-time favorite songs, and one I end some weddings on,” says Bryan Kaylor of Bee Entertainment in Novi, Michigan.

One Reply to “Wedding Last Dance Song Ideas from the Experts”

Absolute Music is an elite group of professional DJs who exhibit energy, user-friendly attitudes, and perform with razor-sharp perfection. With over 27 years of experience you are in good hands!

Absolute Music is a company you can trust – a team of the highest quality professional Dubuque Wedding DJs at an affordable price. We take pride in each event we do, and are defined by the quality and attention we bring to our work. We are honored to provide entertainment and dedicate time and effort to your event.